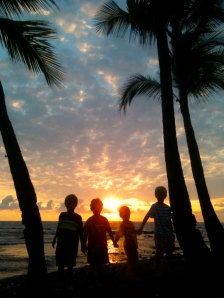 This week we learned about the sun and other giant stars like Betelgeuse which is twice the size of the Earth’s orbit around the sun. But the biggest star they’ve found is the Big Dog star. Canis Majoris is 7 quadrillion times bigger then earth. Last night Mom woke me up and we went out by the ocean where we could see millions of stars. Jupiter was shining very bright and we saw 4 of the giant stars around it. We saw Betelgeuse, Rigel, Sirius and Aldebaran. This video shows how big some of the stars are. by Titus

All of these stars make noises but we can’t hear them because sound doesn’t travel in space. But God can hear them. You can listen, too, on this video. by Joel

Teacher’s Two-Cents (by Mom)
How cool that our hymn this week mentioned the song of the stars!
“Forever singing as they shine, ‘The hand that made us is divine!”
I’ve added a new page to the top of the site called “Hooray for Hymns.” I’ve requested folks to add their own favorite hymns to the list we started by leaving a comment. Let’s join in the celestial chorus of praise to our Lord! 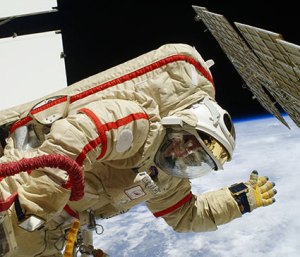 This week we got to see the International Space Station fly over Hawaii. I saw it first coming over the ocean. It looked just a like a big, bright star moving really fast (Joel).

The Space Station is flying over 17,000 miles per hour and is about 220 miles above the earth. It is as big as a football field. 6 astronauts are there right now but 3 will be coming back to Earth on Sunday (Titus).

So was it worth getting the whole family up before dawn and wandering groggily out onto the golf course to get a clear view of this man-made object? I say, “definitely yes” and the boys all agree. They loved the adventure of it but I’m just a big fan of anything that helps put what we’re learning into a solid context. The Germans make a distinction between Kennenlernen and Wissenschaft. The latter follows the usual method of gathering facts about a particular subject while the former involves using whatever means possible to really get to know that subject like you would another person. So we got to get to know the ISS a little better this week and had a grand adventure to boot!