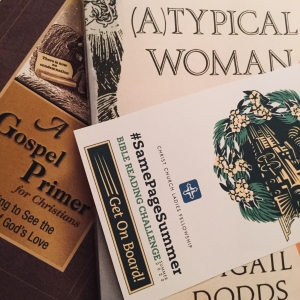 What do the Bible Reading Challenge, the Sheologians Book Club reading of “(A)Typical Woman“, the Grace Church of the Valley womens study of “A Gospel Primer“, and ongoing discussions with several of my friends all have in common?  They all had me rethinking this week what went on in Eden and what certain occurrences there mean for women today. Come take a stroll with me down the garden path of Genesis 3. I’m taking stops at nearly every verse so pardon the halting pace. Verse 1:

“Now the serpent was more crafty than any other beast of the field that the LORD God had made.”

This has not changed. Can we all just keep that in mind? The serpent is still crafty but he’s not infinitely creative in his craft, which means he’s mostly always up to the same old tricks.

“He said to the woman, “Did God actually say, ‘You shall not eat of any tree in the garden’?”

Ladies, something should happen when you hear words like “the Bible never says…” or “the Bible doesn’t explicitly forbid…” There should be an instant red flag. This should cause us to spring into action, pull out our concordances and do a little fact checking. We may find that it’s true — that the Bible truly says no such thing. Or we may find that the Bible actually does say the very thing we’re being told it doesn’t say. Or we may find that the Bible says something similar but we’re not sure if it’s the same thing, in which case we better do a little research till we are sure. But in every case we should be sure about what the Bible actually does and doesn’t say, NOT BECAUSE SOMEONE TOLD US SO, BUT BECAUSE WE’VE ACTUALLY READ IT THERE. Which brings me to my next point.

Poor Eve. She was so close to getting it right. But this passage shows how being off just a little bit can open the door to some really big error. Of course, talking to snakes in general can open that door pretty wide, too. But notice her little added phrase, “neither shall you touch it,” which was absent from God’s original command.  One could say that adding not to touch a thing would only rightly reinforce the command not to eat it. And indeed that is the reasoning behind much of the legalistic “X is forbidden, Y could lead to X, therefore Y is forbidden as well” mentality.   It’s not just legalists who error in this regard.  There are other ways to be just a little bit off when it comes to wielding God’s Word.

Think of Christ’s temptation in the wilderness. Satan used a similar tactic with Him in Matthew 4:1-11. The twist here was instead of questioning God’s law, he abuses God’s promises. Didn’t God say, “He will command his angels concerning you?” Didn’t God say, “On their hands they will bear you up?” Do you really think Satan is beyond using those same tactics today? “God promised X to this person. You are a person. Therefore you should demand God do X for you as well.” If this tactic doesn’t sound familiar to you go watch “American Gospel” now on Netflix.

4 But the serpent said to the woman, “You will not surely die. 5 For God knows that when you eat of it your eyes will be opened, and you will be like God, knowing good and evil.”

Now this one doesn’t seem that subtle but for some reason it works on us women anyway. In Genesis 2:17 God says “Of the tree of the knowledge of good and evil you shall not eat, for in the day that you eat of it you shall surely die.” In Genesis 3:4 Satan says, “You shall not surely die.” This seems to be a pretty obvious contradiction of the law of God.  The average Christian woman should be able to see right through that kind of tactic, right? Yet on any given day I can scroll through my social media feed and see a whole lot of messages that should come with a little red flag warning Christian women that the following statements should definitely be checked against scripture. Instead they are being reposted with little praise hands. “Love yourself” “You are enough” “Believe all women” “Divorce doesn’t disqualify you from anything” “Woman can be pastors too” “You deserve to feel great” “This drink will solve all your problems” “Yoga is just stretching” “Exposing all your ugly stuff is actually beautiful and real” “It’s wrong to judge” “We don’t have to obey. We’re not under the law” “God’s not angry about sin.” Maybe you don’t think any of those statements are lies. Maybe you think all of them are. Maybe you think some are and some aren’t. The question I have for you is, can you show me in your Bible what makes them true or false?  Are you letting Scripture determine what is true? Or are you, like Eve, allowing your own desires and appetites to govern your decisions?

Here’s the thing about most women’s ministries. They seek to indulge our appetites rather than change them. “Women want to hear this and they want to eat that and they want it to look like this and they want to experience that and they want to leave feeling like this.” And voila, the publishing companies, and the conferences, and the Etsy shops deliver all of the above.  It’s interesting to me that when the Israelites needed to be fed in the wilderness, God didn’t just rain down the cucumbers and leeks they were craving from Egypt. He gave them a brand new diet of manna meant to whet their appetite for the true Bread of Life. I’m not saying that the books and Bible studies and conference themes shouldn’t be beautiful and appealing or that austerity is somehow more holy in nature. But I am saying that if the focus of your ministry to women is giving them what they want, maybe you should stop taking your cues from Eve.

It’s not that her desires were overtly corrupt either. She just wanted organically grown fruit which I’m sure was packed with gut cleansing probiotics, and it just happened to have all the right filters to make it glow and all she was really going for was an authentic growth experience in self awareness and personal truth… so “she took of its fruit and ate.” Oh and then because she happened to be extremely influential with her husband she was somehow able to convince him to do the same. Don’t know how. Who ever heard of a woman being able to change her husband’s mind about anything?

7 Then the eyes of both were opened, and they knew that they were naked. And they sewed fig leaves together and made themselves loincloths.

The original bikini bottom right there. And even with just her hubby around Eve knew it was a little unsubstantial. As soon as God shows up they hide themselves and their beachwear out of fear of exposure.

Ladies, what’s changed? Why is exposing our bodies, our sins, our sexual history, our conflicts with others, our messy homes, TO EVERYONE IN THE WORLD suddenly an act of bravery cleverly captioned as “authentic” or “vulnerable”? Have we forgotten that God’s solution for His scantily clad creatures was not to remove their sense of shame or or analyze their guilt complex or take a picture and post it for all the fallen angels to relate to? No! His solution is right there in verse 21 of the same chapter. “The Lord God made for Adam and for his wife garments of skins and clothed them.” God lovingly, mercifully, compassionately stooped and covered them properly.

No, I don’t think we should all pretend to be something we’re not. And yes, true confession born out of repentance of sin has it’s rightful place. I’m just suggesting that FB and IG and Twitter and the blogosphere and your women’s Bible study group and the conference podium are NOT that place. As brave as exposing one’s self to the world might seem, I can’t help but wonder what other fears our exposure is covering up.

With that, I’d like to invite you to a different kind of exposure that takes a different kind of bravery. I’d like to invite you to a feast with no forbidden fruit. It starts June 1 and it’s called Same Page Summer and you can find out more by clicking here. For about 4 chapters a day, 5 or 6 days a week, you can join thousands of other women all over the world as we read through the New Testament together, with our families, with our Bible study groups, on-line, and in many languages.  Come, take and eat.

“For the word of God is living and active, sharper than any two-edged sword, piercing to the division of soul and of spirit, of joints and of marrow, and discerning the thoughts and intentions of the heart. And no creature is hidden from His sight, but all are naked and exposed to the eyes of Him to whom we must give account.” Hebrews 4:12,13