Here’s a super memorable Friday Flashback which you can check out by clicking here https://godmadeknown.blog/2013/01/22/star-light-by-lava-glow/

And below are some factoids on astroids and how a whole belt of them happens to be orbiting the sun.  I asked the boys to come up with their own theories as to the astroid belt’s existence but they all thought the existing Exploding Planet Hypothesis was already pretty sound.  Except for Joel.  He ALWAYS has his own theories about things.

The Astroid Belt by Sam 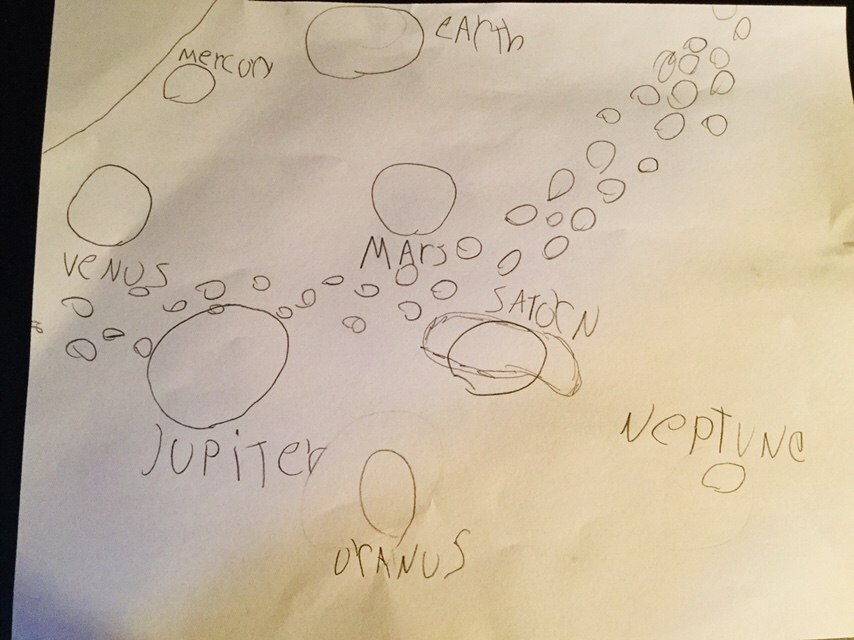 What is the Astroid Belt by Nate

As you all know there are 8 planets in the solar system Mercury, Venus, Earth, Mars, Jupiter, Saturn, Uranus, and Neptune. Those planets are separated into 2 groups. The planets closer to the sun are called the inner planets. And the ones further away are called outer planets. The two groups are separated by the asteroid belt. The asteroid belt is a bunch of space rocks that are orbiting the sun. Asteroids are big chunks of rock and ice. No-one knows for sure where the asteroid belt came from. There is a hypothesis that there was a planet between Mars and Jupiter and it exploded sending big chunks of rock and ice into the solar system and that is how I think the asteroid belt got there.

The Exploding Planet Hypothesis by Titus

The Exploding Planet Hypothesis is a widely accepted explanation for why the asteroid belt exists today. According to the Exploding Planet Hypothesis, a large planet once orbited the sun between Mars and Jupiter. At some point it collided with a space object resulting in a massive explosion. The debris was sent hurtling into space and some of it crashed into other planets and moons. Evidence for this is found in craters on Mars and other planets and moons. The rest of the pieces of rock and ice from the exploded planet formed our present astroid belt.

The Exploding Spider Hypothesis by Joel

Long, long ago in a galaxy far, far away… Wait, the Milky Way is not that far away. Well anyway, a young boy was sitting on his favorite planet, Earth, holding two chemicals he had gotten out of the refrigerator when his mom was not looking. He did not know what he was going to do with them so just sat on the couch looking at them.

As he sat there a spider descended from the ceiling and stopped right in front of the boy’s face. He looked up from the two open containers and the sight of the spider scared him so much he accidentally mixed the chemicals together. They blew up and sent the spider threw the roof and into outer space. So as the spider floated around in space it got hungry and started feeding on the nothingness of nothing and began to get bigger and bigger until it was as big as the earth.

One day the spider got a bit too close to Pluto which froze him solid. Then he got too close to Jupiter which heated him back up. Changing so quickly from cold to hot caused the spider to explode sending chunks of frozen and molten spider all over the solar system. Lots of them hit other planets and the rest of them formed the astroid belt.

And that is my hypothesis on where the astroid belt came from. It is called the Exploding Spider Hypothesis.