This Week’s Memory Verse: W is for…
“When you look up to the sky and see the sun, the moon and the stars –all the heavenly array– do not be enticed into bowing down to them and worshiping things the Lord your God has apportioned to all the nations under heaven.” Deuteronomy 4:19 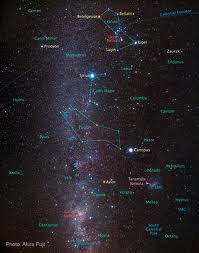 This verse ties in perfectly with our current study of the sky. This week we are beginning a survey of the signs of the Zodiac and how the ancient Hebrews viewed them before their meaning became perverted through pagan astrology. From scripture we know that God created the stars “to be for signs [from the Hebrew “avah” or “a mark,” as in the signs Moses used before Pharaoh] and seasons [from the Hebrew “moed” or “a fixed or appointed time,” never seasons of the year] (Genesis 1:14).” We also know He set the stars in their appointed places rather than just scattering them randomly across the sky (Psalm 8:3). God also named the stars (Psalm 147:4). He didn’t delegate this job to Adam like He did the naming of the animals. “The grand truth is that God made the stars for a witness to mankind of a coming Redeemer who would save fallen man from the clutches of the enemy, destroy the enemy and his power, and finally establish a kingdom of righteousness and light (Fleming, 12).”
But God also warned man repeatedly, as in our memory verse above, not to be lured into a false reverence for these created things and ignore their true purpose, to bring glory to their Creator. Of course, that is exactly what happened to His story in the sky. The real hero, the coming Messiah, was replaced by pagan personas and the stars themselves became their own source of meaning and power. This is astrology as it was millennia ago and as it is today. Here are a few quick facts to introduce our study:
1. The term Zodiac is from the Greek and means “a circle.” It’s root is from the word “zoad” which means “a way or path or going by steps”
2. The Biblical term for the Zodiac is “Mazzaroth” which means “the separated, the divided, or the apportioned”
3. Looking at the stars themselves which make up the 12 signs of the Zodiac it is only with great difficulty that one can imagine them to make up the intricate pictures and stories associated with them. And yet, they are universally found across all cultures to possess nearly identical names and meanings. Clearly, there had to be a common knowledge and understanding of these signs prior to the great dispersion of people mentioned in scripture. It is this ancient understanding and interpretation that we will be exploring in the next few weeks.

O there’s sunshine, blessed sunshine, when the peaceful happy moments roll;
When Jesus shows His smiling face, there is sunshine in my soul.

There is music in my soul today, a carol to my King,
And Jesus, listening can hear, the songs I cannot sing.

O there’s sunshine, blessed sunshine, when the peaceful happy moments roll;
When Jesus shows His smiling face, there is sunshine in my soul.