This week we learned about galaxies like the Milky Way. The Milky Way is a spiral galaxy. Only spiral galaxies can support life and only on the outer arms. That is where our solar system is (Titus, 9 1/4).

We learned about the different shapes of galaxies. We made our own galaxies with glitter and glue. Mine was a spiral galaxy and so was Ti’s. Nate’s was a barred spiral galaxy and Sam’s was an irregular galaxy. There are also elliptical galaxies but nobody made one of those (Joel, 7 1/20. 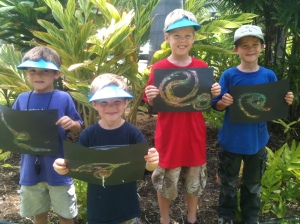 We made Sombrero Galaxies out of tortillas and beans and sour cream and cheese. Our friend Sei made one, too. Then we rolled them into burritos and ate them (Nate, almost 6!).

With a house full of boys I don’t have a whole lot of glitter in my life. So when I planned this galaxy project I thought we were safe doing it outside on the picnic table. All of you glitter veterans out there are probably laughing at my ignorance. That stuff is a true scientific wonder. The makers of germ warfare should use it as a model. I’ve never seen anything spread so quickly or so thoroughly onto and into every square inch of our persons and household. And showering doesn’t help either. It even showed up on the Sombrero Galaxies we made later. One of our neighbors joined us for that project. The boys taught their friend, Sei, all about galaxies and Sei’s mom gave them their Japanese lesson in return. A great trade off, I think. I started out teaching the boys German with plans to move onto Latin, because that’s what I knew. But the Lord moved us all onto an island in the middle of the Pacific and now they are learning Hawaiian and Japanese instead, two languages I know nothing about. I have no idea how God is planning on using these languages in their future but I’m sure He has something in mind! Oh, and by the time Sei and his mom left they had glitter on them, too.