I’m almost embarrassed to say how little this “shelter-in-place” mandate has altered our lifestyle. Other than not going down the mountain every one or two weeks for church, music lessons, shopping and appointments, the only real change has been the increased screen time. Church, lessons and shopping are now all on-line. Plus we’ve been taking advantage of some of the great on-line learning resources that have now been made temporarily available for free.  We just started The Great American Story course through Hillsdale College. Next will be the World War II course taught by Victor Davis Hanson. How cool to have my own kids able to learn from one of the same instructors that I sat under while studying philosophy at Fresno State! Downside is that it’s more screen time.

Ditto for Ligonier Ministries who has just made all their on-line resources available for free through June, including their interactive group Bible studies! We’re talking about a monumental amount of sound Biblical teaching now just a click away. For example, you can take Elisabeth Elliot’s video course “Suffering Is Not for Nothing” with over 1000 other participants and invite a bunch of friends to be apart of your on-line study group. Downside is that its more screen time.

Not all of Ligonier’s resources require a screen. One of my favorite freebies is their internet radio app called RefNet.  We discovered this audio resource when Tom’s Mom was sick with cancer. We even added it to her Alexa so all she had to do was say “Alexa, play RefNet” and a 24/7 line up of her favorite teachers–Piper, MacArthur, Sproul, Nancy Guthrie, and dozens of others–would play at her command. The messages are interspersed with quality traditional Christian music, Bible readings, devotional readings, and even news breaks from a Christian perspective. At a time when our elderly are now even more isolated than ever, this could be a life changing gift for someone you know.  They even play the Lamplighter Theatre’s audio series in the evenings for the kiddos. My younger boys love these action packed stories and I love that they don’t need a screen to enjoy it. Last night we blasted “Escape From the Eagle’s Nest” from the front porch while they sledded and built a line of snowmen down the middle of the road (fewer than 10 and they were all at least 6 feet apart, of course). 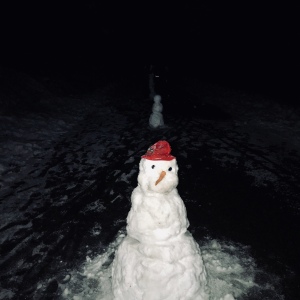 I’m a serious podcast junky and being home 24/7 has only fed that appetite. Growing up  in a house without TV meant the height of electronic entertainment was listening to Family Radio. The voices of J. Vernon McGee and Charles Swindoll were as familiar to me as the sound of the furnace clicking on in the morning or the crunch of the gravel as my Dad’s car pulled into the driveway every evening. I love it that my boys already know by name the voices of Steve Lawson, Doug Wilson, Paul Washer, James White, Alistair Begg, the Apologia guys, the Cultish guys, the G3 guys, the Just Thinking guys, and even the gals from Sheologians, What Have You, Relatable and my favorite Mama Bear apologist, Alisa Childers.

But even the voices of the best teachers can become a distraction and like Saul, we need some music to soothe the soul. I used to be a hymns and classical-only kind of gal so Bach was my go-to method of relaxation. The whole world of classical music is available for streaming on-line. Now I get the even greater privilege of hearing Joel practicing my favorite hymns on the piano, or Nathan doing the same on his violin or cello, or Titus rearranging some Bach for his mandolin. But Titus has also broadened my musical horizons with other genres and now I’m enjoying listening to him play things like “Take Me Home West Virginia” or “Recuerdos de la Alhambra” or even his original “A Blues 65” on his Youtube channel. If you all aren’t subscribed to it yet, you should be. 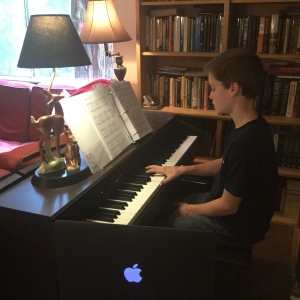 The boys have also figured out other ways to utilize the airwaves during this time of social distancing. A while back I bought a cheapo 4-pack of walky-talkies which they managed to rig discarded radio antennae onto. From the top of our ridge they’ve been in communication with their good friends who live in another town about 30 miles away. These friends also own a weekend cabin up here so they’re sheltering in place less than 1/2 mile away but no one can get together. So out come the walky-talkies. They’ve even been playing games over them by drawing out each-others’ moves. Radio Jenga anyone? 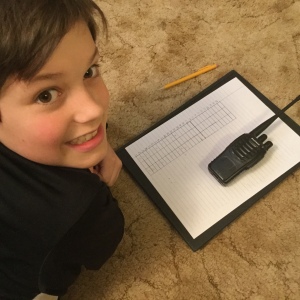 With all these sounds and lit-up screens around me, I’m left wondering what a pandemic would have looked like before the age of wifi.  For us that was just last summer.  Until then our only option up here was very costly satellite internet. We had to walk down the road to a friend’s house to catch a signal or to the camp office to plug in. Then Tom signed up to get his Mdiv through the distance learning program at Master’s Seminary. That’s when we realized just how much of a pain it was going to be to get all his work done at the office and just how impossibly expensive it would be to pay for satellite ourselves. So we prayed about it. We prayed that if seminary was really God’s will for Tom that He would provide the way to get it done. THE NEXT DAY Kingsburg Media Foundation was at the camp, scouting it out to see if we were a possible candidate for their reduced-cost internet services.  What a timely provision!  And even more so when I think of how difficult it would have been to shelter-in-place without being able to access our church service live-stream, shopping, classes, music lessons, and more on-line.

I guess there’s never really a good time for a pandemic but it amazes me how the advent internet has changed the face of this one.

As long as I can remember, Genesis has been my favorite book in the Bible.  I love starting each home-school year off with “In the beginning God…”  No matter what we’re studying, that’s where we start.  That’s where the foundation for each subject is laid.  Science, history, math, language arts—it all must build on that solid rock of scripture if it is to maintain any integrity within the Christian faith.  And yet, so often Genesis is left out of the building of the most important subject of all, theology.

This past year I have fallen in love with Genesis even more.  Once your eyes are opened to the glories of Christ as revealed on every page of scripture it’s impossible to look away.  The book of Genesis from its very first words, sets the stage for the cosmic drama of redemption designed to put on display to all rulers and authorities in the heavenly places, the manifold wisdom of God (Eph.3:10).  Two books that I have read recently highlight major redemptive themes found in the book of Genesis and trace them throughout Scripture toward their ultimate consummation realized in Jesus Christ and the kingdom in which He reigns. 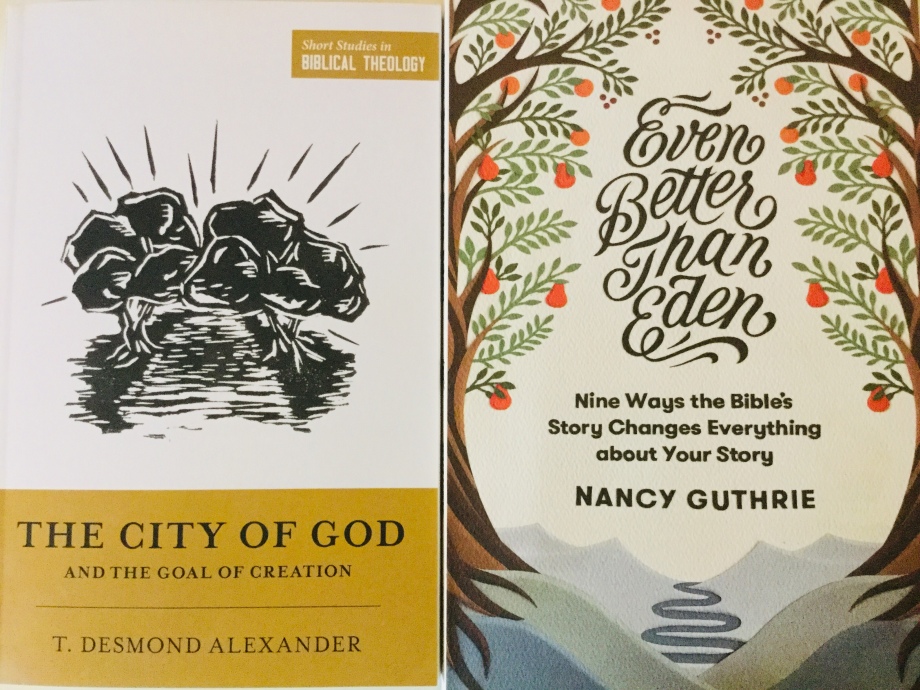 In “Even Better Than Eden”, (Crossway, 2018). Nancy Guthrie traces the themes of Wilderness, the Tree, God’s Image, Clothing, the Bridegroom, Sabbath, Offspring, Dwelling Place, and the City from the Garden of Eden through the Old Testament and into the New Kingdom established by Christ.  She argues that even though Eden was unsullied, it was incomplete.  “From the very beginning Eden was not meant to be static; it was headed somewhere (12).”  That somewhere is what both the Old and New Testament saints were looking forward to.

“You and I were meant to enjoy an environment, a sense of purpose and satisfaction, and an intimacy with God and each other that is even better than Adam and Eve enjoyed in Eden.  Eden had the seeds of the new creation, but all those seeds will burst into glorious bloom in the new heaven and the new earth.  When we enter the new Eden, our Sabbath rest, the final temple, the New Jerusalem, we’ll begin to experience all that God has intended for his people all along (159).”

The second book I read picks up on just one of those themes, the City, and fleshes it out in extraordinary detail.  T. Desmond Alexander is the author of “The City of God and the Goal of Creation” (Crossway, 2018).  This book is extremely helpful in understanding Jerusalem as the Temple-City, the Holy Mountain City, AND the Royal City as well as its archetype city, Babylon.  But the book really gets exciting in its last two chapters where it delves into the future City of God, the New Jerusalem.  Alexander argues that against the background of pre-fall Eden to post-fall Babel and beyond,

“The biblical story recounts how God takes the initiative to redeem people from the grip of the Evil One, gradually establishing his kingdom on the earth… The Old Testament story of Israel’s redemption from slavery in Egypt begins a process that climaxes with God coming to dwell on Mount Zion.  This process provides a paradigm for understanding divine salvation, as God takes the initiative to create a holy temple-city.  The events that lead to the construction of the temple in Jerusalem illustrate something of what entails salvation and how it is achieved.  These events also anticipate a greater salvation that will come through a future Davidic king (164).”

That may sound just a bit heady but Alexander follows through with a beautiful application on the very next page.

“For those who are united to Jesus Christ, eternal life begins here and now, as does citizenship of the city that will one day be created by God on a renewed earth.  Jesus challenges his followers to look forward in faith, to pray and work for the spread of God’s rule here and now (165).”

“Jesus Christ calls his followers to be kingdom builders here and now, but they are to do this with the confident assurance that Christ will return to address every injustice as universal judge, vindicating and punishing as appropriate.  Only then with the defeat of evil will God establish New Jerusalem on a renewed earth (165).”