A lot of people think that the famous astronomer Galileo was the first person to invent the telescope but actually it was invented by a lowly eye glass maker from Holland by the name of Hans Lippershey. He discovered it by looking through two pairs of spectacles held in front of one another pointed at a clock tower and to his amazement it appeared much closer. Then he found a tube fitting the lenses thus making the telescope. Galileo modified Lippershey’s design making it useful for star gazing (Joel, 13).

Galileo’s telescope became quickly popular with everyone but the Catholic Church. Rome forbade Galileo to teach his ideas even though the telescope proved some of the ideas of Copernicus and Kepler, such as the fact that earth moves and revolves around the sun. They considered his teachings “foolish, absurd and heretical” even though according to Galileo they didn’t contradict scripture, only false interpretations of it. He said, “God is a Spirit. From HIs divine word, Holy Scripture and Nature do alike proceed…The Holy Scripture cannot err, but its interpreters can.” (Titus, 14).

Teacher’s Two-Cents:  About Telescopes and TJ’s

“When I vlook at your heavens, the work of your wfingers,

the moon and the stars, xwhich you have set in place,

and athe son of man that you bcare for him?”

When was the last time you looked, really looked up at the heavens, the moon and stars? Even with all our knowledge of the natural world and ready technology for gazing even more deeply into the unknown, we seem far too content to access Hubble’s views on a screen rather than bundle up, step outside, and check it out ourselves.  Perhaps it’s because our naked-eye view seems to pale in comparison with the images jaw dropping images modern technology can afford us.  Just visit HubbleSite.org to see what I mean.

But either way you choose to gaze, via computer screen, or outside in the quiet, chill  of the night, are your thoughts drawn to the Creator of it all?  The Psalmist’s were.  When he looked up he couldn’t help but think, “what kind of God could create all THAT and still care about me?”

I love being there for the WOW moment that occurs when a child sees the moon through a telescope for the first time.  It’s the same kind of awe that the Psalmist expressed and that we should all experience when we really stop and think about what’s just above our heads.  Except we seldom do.  Why not change that?  Get out that dusty telescope, bundle up and go outside.  Bring a thermos of hot drinks and space-themed snacks for the little people in your life and have your self a star-gazing party.  Trader Joe’s can help with the snacks.  Just look at all the yummy cookies we found there! 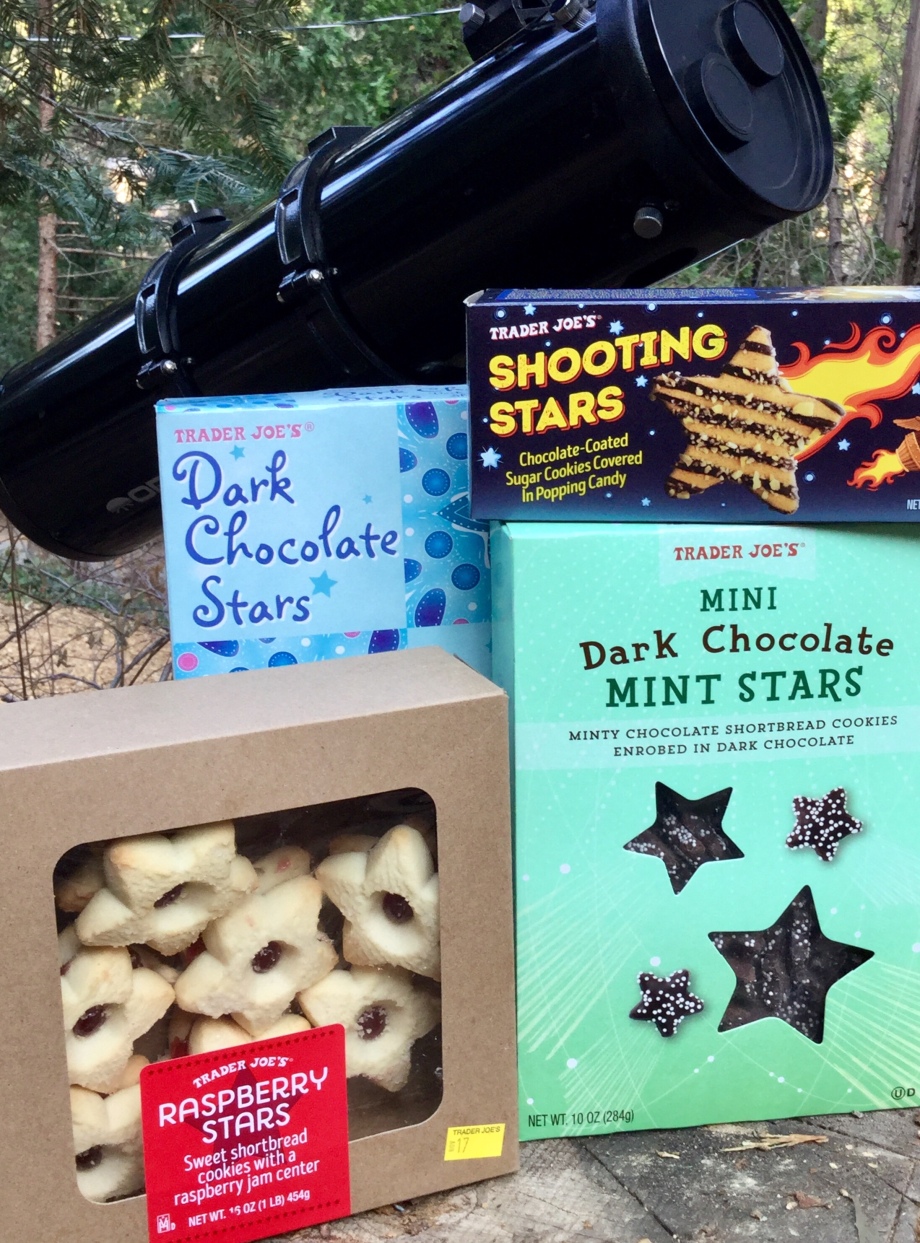 And if salty is your thing, try these!

Maybe you’re one of the poor souls who lives in a Trader Joes-less wasteland.  I do feel your pain having endured 4 years of the blandness that is standard-grocery-store fare while living in Hawaii.  You could always pick up some Starburst candy or Milky Way bars instead.

Whatever you serve at your party, start with something easy to find and focus on like the moon and you too, might get to witness the “Wow” in a child’s eyes.  Maybe, you’ll even hear the precious words I did at our last star-gazing party.  “That was less dumber than I thought.”  Not exactly the making of a Psalm but profound in its own pre-schooler way.