Here are the first 4 signs of the Zodiac as the ancient Hebrews saw them and their 3 deacons (smaller,corresponding signs). The illustrations are from Ken Flemming’s “God’s Voice in the Stars.”

Virgo is Mary and Coma is Mary holding the baby Jesus. Centaurus is a man-horse just like Jesus was a God-man. Bootes is the Lord our Shepherd (Sam, almost 4, with Nate’s help, and maybe a little of Mom’s, too).

Libra is a scale that weighs our sins. Crux is a cross because our sins weighed too much so Jesus had to die on the cross. Lupus is an animal that had to be killed like Jesus. Corona is a crown for Jesus because he died for us (Joel, 7 1/2.) 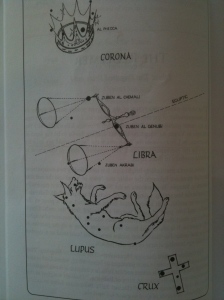 Scorpio is a giant scorpion trying to sting the hero who is stomping on his head and wrestling a giant snake called Serpens. Hercules is a hero killing a snake too (Nate, 6). 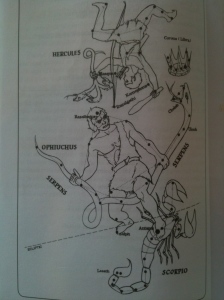 Sagittarius is another man-horse and the man part is an archer. Lyra is a harp to praise the hero with. Ara is a fire for Satan to burn in and Draco is Satan getting killed (Titus, 9).

Teacher’s Two-Cents (by Mom)
To help us remember the order and meaning of the 12 signs I am making up a little rhyme as we go along. Here are the first 4 stanzas:

Just like the Gospel writ of old,
The Story in the Stars is told,
Beginning with the Virgin Birth,
VIRGO shows God come to Earth.

Our sins in balance had been weighed,
And God required a Price be paid,
LIBRA shows the Scales, fair,
and the Price that God, Himself would bare.

Mortal conflict would ensue,
Our Hero’s heel would be bruised,
But He would crush SCORPIO‘s head,
And the serpent, too, is trodden, dead.

Now SAGITTARIUS doth come forth,
His double nature, being double worth,
An archer He, both man and beast,
Like our Mighty God who became The Least.